This sold for $39.99.This time,ill have famous quotes from the characters! As always, I will do minifigs from favorite to least favorite.

The Riddler: Riddle me this?!He includes the very first lego bowler hat along with a crowbar(supposed to resemble riddler cane)He has muscles too.Plus he has his riddler belt.

The Joker:Why so serious?!Read 6863 Batwing Battle Over Gotham City Wanna know how i got these scars?

Harley Quinn:My love for the Joker was stronger than their madhouse walls! She has a harlequin hat along with her red and black color scheme.

Batman (blue):You'll hunt me. You'll condemn me, you'll set the dogs on me. But that's what has to happen.Read 6858 Catwoman Catcycle City Chase

This is different than the one in 6860 Batcave. it has two motors at the back with a lego chair(blue).It doesn't have a hood like the batcave one,so where is the motor at?reply in comments.

This is part of baggie 3.It has a white red and black color scheme.it has a couple of red handles on front with white on back.

The bottom has the tracks where harley's cart can roll down and it can cross through the joker's face.Complaint:it is hard to line up each half of joker's face just right.You get an extra riddler hat and face.I understood why people thought it was the old head-in the instruction booklet,it showed the old head.The top includes way more features than expected.Includes the riddler's falling floor trap,Harley's moving floor,and harley's hammer slammer(i like rhyming).Plus,it has the joker's face on top of that to equal the best DC set ever!

Overall,i rate this a 5 out of 5.Tons of play features with the dynamic duo ensures fun forever!or Batman forever?(Comment if you got the joke) Thanks,User:Mr.Brick 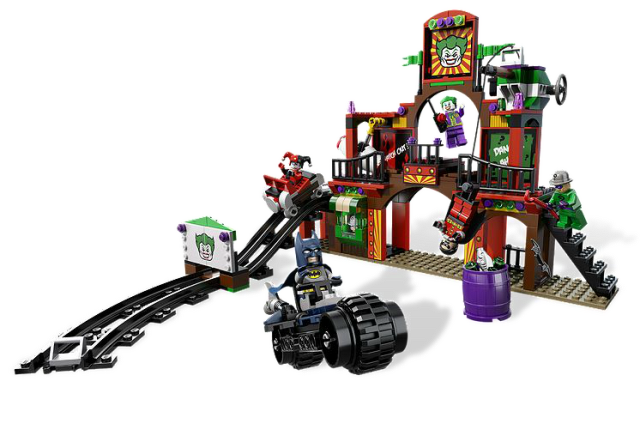 This is a super fun set for anyone who like Batman. It has all the bells & whistles you can think of. Trap doors, roller coasters, all kinds of fun stuff. It may be a little tough for someone to build that is younger, but it is fun when you finish it. *Guaranteed* Hours and hours of play with this set, because the set never gets boring!

Community content is available under CC-BY-SA unless otherwise noted.
Advertisement